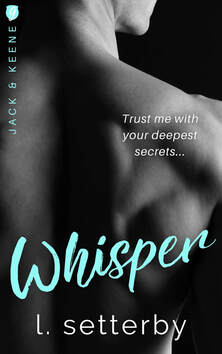 TRUTH THAT MUST BE TOLD

When the friends he's been sleeping with get engaged and cut him out of their lives, newly-minted small town police officer Jack Miller confesses his heartbreak to the absolute last person he should tell: his superior officer, Bryan Keene, a former Marine, volunteer firefighter, and, Jack suspects, a closet case. Keene is a really good listener. Jack finds himself confessing to even more, including the trauma that haunts him, and the distressing desires that he keeps at a distance.

SECRETS THAT MUST BE KEPT

Keene has never met anyone as honest as Jack-or as perceptive. Youthful, beautiful Jack sees past everything Keene says and does. For the first time in almost a decade, Keene wishes he could be honest about who he is. But Keene has segmented his life so completely since his return from Afghanistan that he no longer knows how to be a whole person. Falling for Jack-his subordinate, the rookie-puts everything he's built in jeopardy.

LOVE THAT RISKS IT ALL

Although they promise themselves they'll stop seeing each other, they soon relapse into dating in secret. Jack wants to tell their police chief and take their relationship public. He sees a chance for something real-a meaningful counterpoint, at last, to the painful directionlessness of his life. Keene wants to help Jack, who is dogged by his past, and more importantly, he wants to be with Jack. No matter how sure he is that Jack will leave Grenton, and Keene.

In a town this small, in the grip of a series of mysterious fires, secrets cannot stay hidden for long. And when all truths are finally told, the consequences may be unbearable. WHISPER is a stand-alone full-length novel in the Grenton PD romance series.